It has been 5 years from the tragic earthquake that shook Nepal in 2015. We want to share with you a few words that Cristina Morales, at that time President of Amics del Nepal, has written about how she lived it.

Also we share the link to her interview on Els Matins on TV3 (on our youtube channel and on TV3).

Death and the mountains

On March 24, 2015, I was on a train, going to Valencia for a music exchange with the Conservatory.

News came from the Alps. A plane had crashed.
It seemed impossible, but it was true: a pilot went looking for death on the mountain, and took one of my best friends’ life.

Just a month later, on April 25, in Barcelona, ​​we celebrated the return of the same exchange with our colleagues from Valencia.

Suddenly, the phone rang: Nepal had been shaken by a terrible earthquake. Hours passed, and the reality was devastating: thousands of dead, buildings collapsed, historical heritage destroyed, avalanches in the mountains that wiped out entire populations …

The following hours, days, and weeks put us to the test: the mobilization of the board, which I had the honor of chairing at the time, as well as of all the volunteers in Nepal, was extraordinary.

I had conversations here and there that I will never forget: the feeling of facing tragedy together, the uncertainty of not knowing if I would face what was expected from me at such a critical time, the commitment of volunteers in Nepal, risking their own safety going and looking for shops, going and bring food, helping.

Here were days and weeks of whirlwind: suddenly Nepal was the center of the news, and we had to go to the media, tell the tragedy, ask for help, mourn the missing, try to protect the children, youth, women and staff from our centers…

Turning a meeting that was to serve to celebrate the 20th anniversary of Amics del Nepal into an act of tribute, solidarity and commitment to reconstruction was a team effort that I will never forget. My infinite affection and appreciation to all the board members and volunteers for their attitude and their effective and generous work in managing the tragedy for the 2015 Nepal earthquake. 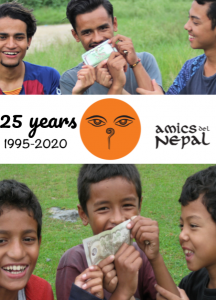